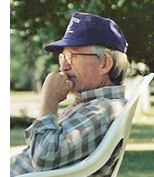 dip (he never capitalized the “d” in dip so it would read the same up-side down as right-side up) Sinclair entertained and was loved by all who came into contact with him. One client, after spending an evening with dip in San Francisco, wrote to say that he saw in dip the best embodiment of personality, humor, and character recalled in that great American humorist, Will Rogers.

dip always saw things a bit differently…always cocked at an unusual angle. If the occasion got too solemn, he would find a way to lighten it up. In a San Francisco financial district elevator full of very self-important people, he turned to the packed group of strangers to ask “if they knew why he had called them all together”… and then ask for an agenda. He was occasionally known to turn, as the elevator indexed into position, and crash into the doors falling to the floor. You never knew what was coming next.

dip was a man with a bright mind that never seemed to forget a wise and clever saying…a few follow:

dip was generous with himself and his “things.” Many had a key to his Denver home – a home with at least four beds and a big couch. On occasion, an empty bed couldn’t be found. Sometimes dip wasn’t around, but others were.

dip also funded lots of solutions to personal problems that people came to him with. He was one of those folks who pass through life giving far more than they take! Everyone would have benefited from knowing him and those who did are all better for the knowing.

Finally, in memory of dip, there is little remembrance of awards and other forms of recognition for his service. All he received were promptly ignored because it was never about dip. It was always about his people in the field, his clients, and his friends.