“Calgary, Canada has a great number of good looking logos atop its downtown towers. It announces the presence of a lead tenant, CH2M HILL, a global leader in consulting, design, design-build, operations, and program management celebrating its 35th year (2013) in this city.

The new Calgary office (1978) developed quickly and, teamed up quickly with Watson Engineering, won some relatively large heavy oil projects. A break-through was Suncor Fort Kent, which further established CH2M HILL’s credentials in water treatment and led to recycling for thermal heavy oil projects. It also laid the ground work for the acquisition of Watson Engineering in 1984.” [Excerpted by Dave Evans from a Waterton newspaper scan]

“Watson engineering was the company’s first acquisition in Canada. The company was started by Tom Watson in 1979 and became part of CH2M HILL in 1984. I joined CH2M in 1985 so I knew most of the Watson people although they were so well integrated that I didn’t know they were Watson people until much later. Tom was a crusty old guy who played contact hockey into his sixties. I was a little afraid of him at first until I got used to his dry sense of humour. We became good friends. Tom’s first love was flying and he owned a Cessna that he flew out of Springbank airport in Calgary. One of the senior people who came with Watson Engineering was Rob Bridgett. He was not an engineer but he did all their costing and pipe stress analysis work. He was a really nice fellow. His passion was also flying and Tom and Rob had many adventures including flying to Ireland via Newfoundland and Iceland. Sadly this passion was their undoing. Flying home one afternoon from BC they hit bad weather and the Cessna froze. Losing control, the plane crashed into the side of a mountain. Tom and Rob were killed, as was another passenger. By this time Tom had retired and Rob had moved to another company but their loss was felt heavily by us old-timers at CH2M.”

Pat Berry was originally with Watson Engineering. He writes: 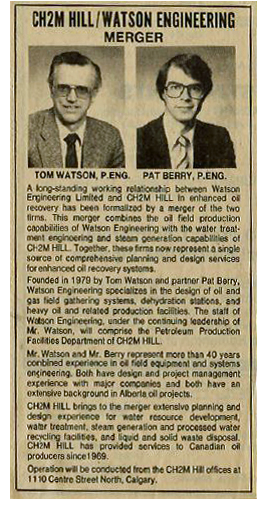 Tom Watson and Robb Bridgett were good friends who loved to fly. They had many trips together and both were experienced pilots. Not long after Tom retired and Robb moved companies they were flying over the Rockies when Tom’s Cessna had mechanical problems in extremely poor weather conditions and they crashed in the mountains. Tom, Robb and another gentlemen lost their lives.