Introduction to the UOSA Story

In 2011, CH2M HILL completed four decades of continuous service for a very important and unique client known by the acronym UOSA. UOSA stands for one of the premier wastewater treatment authorities in the world, the Upper Occoquan Service Authority. Born amidst political turmoil, without fiscal support from its founding entities, and tasked with meeting the requirements of then unprecedented stringent effluent discharge standards, the future of UOSA was far from assured at its creation. And given that, at its start on April Fool’s Day, 1971, UOSA was penniless, why would CH2M HILL, a firm with its roots—and its offices—on the West Coast have any interest?

Two major forces drove CH2M HILL’s interest. The first of these was the unbridled enthusiasm and confidence of a young engineering staff eager to prove that they could make major contributions to the field of environmental engineering. The second was the powerful vision of a young, ex-U.S. Navy nuclear engineer, Noman M. Cole, Jr.

Water quality studies showed that the Occoquan Reservoir located in Northern Virginia had been seriously degraded for use as a public water supply by the Fairfax Water Authority. The problem: inadequately treated sewage discharged from 11 small treatment plants tributary to the reservoir. As the first step in addressing the problem, the Virginia State Water Control Board (SWCB) commissioned a study in partnership with the affected Counties of Fairfax, Fauquier, and Prince William, Towns of Manassas and Manassas Park as well as the Fairfax Water Authority. Three possible solutions were presented as a result of the study:

The regional approach (a modification of Option 3) became the reality in August 1970 when the US Environmental Protection Agency (USEPA) advised the SWCB that discharge of secondary treated effluent within the Occoquan Watershed was not acceptable and that a high degree of advanced waste treatment (AWT) would be required. Also in August 1970, then Virginia Governor Linwood Holton appointed the outspoken Noman M. Cole, Jr. to the SWCB. The following month, Cole was elected Chairman of the SWCB. By October 1970, Cole had visited and extensively studied the South Tahoe Public Utility District’s AWT plant designed by CH2M in consort with Clair A. Hill and Associates. On October 30, he presented a draft report entitled Tahoe East for the Occoquan to the watershed jurisdictional leaders. The leaders reacted favorably.

A final version of Tahoe East for the Occoquan report was issued on January 15, 1971; and the SWCB, at its January meeting, adopted a policy for waste treatment and water quality management in the watershed, known as “The Occoquan Policy.” The policy required the design of state of the art AWT plants in the Occoquan Watershed be similar to the Lake Tahoe plant. Thus, on April 1, 1971, Fairfax and Prince William Counties and the Towns of Manassas and Manassas Park formed the Upper Occoquan Sewage Authority to own and operate the high performance AWT plants required by the Occoquan Policy.

To meet the stringent effluent requirements dictated by the Occoquan Policy, many rigorous design requirements, all focused on reliability, have since found their way into what is today termed the “standard of excellence” by which design of sewerage facilities is judged. Noman Cole, with his background in nuclear submarines and as consulting nuclear engineer, led the effort in developing the design requirements. Following are just a few of the requirements that many will recognize as today’s design standards. 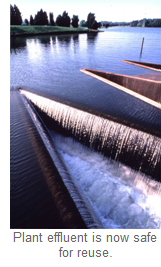 Today UOSA discharges an average flow of approximately 30 mgd with levels of contaminants orders of magnitude less than the combined constituents of the original 11 treatment plants in 1970 discharging only a total of 3 mgd at the time. UOSA’s effluent has gone from an environmental concern to a valued resource in the community protecting the drinking water supply, and actually increasing the safe yield of the Occoquan Reservoir to allow further growth and prosperity for the region.

After four decades from the formation of UOSA, CH2M HILL remains its prime design consultant, a position built on mutual trust, respect and a common understanding of the goals UOSA works to achieve. Cole’s aggressive vision in 1971 helped to create two powerhouses: a remarkable, progressive, and visionary authority that uses cutting-edge technologies for wastewater treatment and a consulting engineering firm that rose to the challenge and built long-term solutions for its client. UOSA is a symbol of CH2M HILL’s commitment to client service, technology, and our entry onto the national (and international) stage as a premiere engineering services provider.

The UOSA Story would be incomplete without mentioning the role that has been played by the authority’s first executive director. Millard Robbins, Jr. served in that role continuously from 1972 through 2000. Prior to his selection as executive director, he was involved in promulgation of the Occoquan Policy and review of the original PER as an engineer on the SWCB staff.

The UOSA Story would also not be complete without mentioning the four decades of CH2M HILL engineers that have served the client and the firm with high distinction.

Without their dedication and strong commitment to meeting the needs of UOSA, there would be no UOSA Story to tell. (The UOSA Story) (PDF)