The following was published in the July 2010 issue of the Journal AWWA by Mary A. Parmelee, Editor 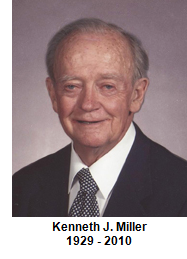 Kenneth J. Miller, whose contributions to the water industry — from water quality to research to clean water in the poorest areas of the world — are memorialized with an award in his name, died June 17.

In his inaugural speech as AWWA president in 1981, AWWA’s centennial year, he said, “During the next 100 years, we will need to address the following concerns: first, AWWA’s role and its responsibility to assist Third World developing countries.”

Later in an interview for the CH2M HILL newsletter, he would pinpoint when he first made his commitment to a worldwide contribution by North American water professionals. “In 1976, I first heard about the thousands of children who died each day because of unsafe water. I knew then my goal as AWWA president would be to do something to help,” Miller said.

“[Ken’s] spirit will live on in the work of Water For People, transforming the lives of thousands of people in poor communities around the world, said Elisa Speranza, current WFP chair.

Miller, a senior vice president and director of CH2M HILL, established a workplace giving program at the consulting firm, which last year raised $229,000 for WFP. The company has volunteer coordinators in more than 100 offices in North America and in several international offices.

Miller’s list of concerns in that presidential speech did not stop with technical aid to people with no access to safe water. As a matter of fact, they sound uncannily contemporary:

At the end of that speech, he said, “In the next century, we will be concerned with … direct recycling, desalting and the strains of a population explosion to exceed 10 billion inhabitants on Earth.” (The world population is estimated to be 6.8 billion and on target to reach 10 billion by 2040.)

Miller began his career working in laboratories with a degree in chemistry. He headed up the environmental health laboratory for the city of Denver before moving to the Denver Water Department, where he became head of environment and quality control and director of planning and water resources.

Rocky Wiley, former AWWA president and a consultant with TetraTech, said Miller had a “giant impact on the water industry around the world.” He is the only person to have served as president of AWWA, chair of AWWARF and president of Water For People.

Wiley, who worked for Miller at Denver Water, recalled the personal way his boss treated everyone. “When you met Ken, you were his friend — and from then on he would remember your name and always go out of his way to say ‘hello.’ And not long after, you would find yourself involved in AWWA.”

Miller and his wife Betty always went out of their way to make people feel welcome, and they befriended many within their professional and volunteer circles. He was a “generous spirit” — with those he knew and those whose lives he touched but never met — said one family friend. The Millers were Wiley’s and his wife Georgia’s inspiration to give back to an industry that had treated them so well.

His service in other water arenas was notable as well. He was a member of the US Environmental Protection Agency’s Management Advisory Group, the National Drinking Water Advisory Council and the National Academy of Sciences-Assembly of Engineers.

He is survived by his wife, Betty, sons Mike, Doug and Steve, daughter Linda and 12 grandchildren.