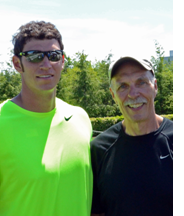 Following retirement from CH2M HILL, Steve returned to coaching the throws (i.e., shot put and discus) in track and field at a local high school, Regis Jesuit High School in Aurora, Colorado. Steve previously served as a graduate assistant for the throws at Oregon State University during his 2 years at OSU getting his Masters Degree. He also served as OSU's throws coach from 1976 to 1983, following his retirement from his competitive throwing.

At Regis High School, Steve coached both boys and girls in the throwing events. Additionally, he began coaching an aspiring former college discus thrower, Lance Brooks, who had recently located in the Denver area.

The working relationship with Lance began with Steve coaching him a couple days a week, focusing on his throwing technique. That expanded to 3 to 4 days a week during the spring competitive season. As Lance's technique improved, Steve started to be more involved in improving Lance's strength. These combined efforts helped Lance place 3rd in the USA National Championships in 2009 and 2011. The 3rd place in 2011 also qualified him for a trip on the USA National team to the World Championships in Daegu,Korea.

Returning from Korea, Lance stated his interest in pursuing a spot on the U.S. Olympic team going to London in 2012. For that to occur, he needed to place in the top three at the 2012 USA Olympic Trials competition as well as throw at or over the Olympic "A" qualifying standard of 213' 3" (i.e., 65 meters) prior to the Olympics. This was a serious commitment that redefined the coach/athlete relationship, thereby requiring Lance to more closely follow Steve's programs and direction. That translated to throwing 3 days a week, typically for 2 hours each day, and a revamped, stepped-up weight-lifting program defined by Steve. The new lifting program included increased workout intensity and three workouts a week typically lasting close to 3 hours for each workout.

Lance agreed to Steve's conditions, which resulted in substantial progress in his throwing technique and improved strength prior to the 2012 competitive season, which began in April. When competitions started, Lance had a significant early season throw of 212' in April at the Maui meet. Progress stalled, however, after that in various competitions with the best throw in meets being 5 to 8 feet below the 212'. In the month before the Olympic Trials, the training throws during practice sessions again started improving as they continued focusing on the critical few problem areas. Most importantly, Lance needed to relax more in the meets, not rush the start of the throw, and do what he was doing in practice. Going into the Olympic Trials, Steve and Lance understood that Lance would not go to the Olympics unless he placed in the top three and threw 213' 3" or better.

The discus trials consisted of 2 days of competition. In the first day of competition, the 24 throwers who had qualified for the trials get three throws each. Based on those throws, the top 12 throwers would go on to the finals competition 3 days later.

On the day of the first trials competition for the 24 throwers, it was raining lightly and the temperature was in the 60s. The throwers came out in two groups of 12 throwers each. Lance was in the second group. When his group came out, they all were given the opportunity for two warm-up throws. Typically, throwers take the warm-up throws, particularly on cool days; but Lance did not take his. There was something different about Lance that day. Typically, he's relatively friendly and gregarious with the other throwers. That day, he wasn't talking to anyone and continually paced in a self-defined 10-foot square of grass. When his first throw came up, he did not rush the start and threw a line drive 210', his best throw in over a month and was leading all other throwers by over 7'. He took a second throw that was another low "snake killer" that was out of bounds, and not measured. It was decided not the take the third throw since he already had the longest throw. 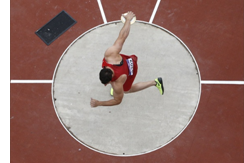 On the day of the finals, it was again cool and raining lightly. Again, Lance was in the second group because of his longest throw in the qualifying competition. When he came out, it was clear that he was focused as he again isolated himself.

On his first throw, he was relaxed and not rushing the technique and threw a very respectable leading throw of 210' 11". This was a full 10' farther than any other thrower's distance after everyone completed their first three throws. The risk of not being in the top three was no longer a concern. The first throw was too low, so Steve signaled to Lance to elevate the throw more. Lance's second throw was again controlled, still low, and an identical 210' 11". On his last of the first three throws, he improved to just over 211'. Base on his leading throw, Lance would now be the final thrower for the group of remaining throwers, down to 8 from the original 12. All eight would get three more throws. 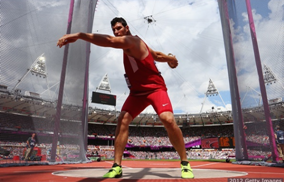 Lance's next two throws were both estimated to be 207'-210' aggressive throws that were fouls due to stepping on the discus ring during the throw. Going into the last round of throws Lance still lead by over 6'. So it came down to Lance having one more throw to make the Olympic team. While he had won the competition, he still had not achieved the necessary "A" standard distance of 213' 3" and wasn't going to London unless he did.

At that point in the meet, there was a short time where no other events were being contested. The PA Announcer took advantage of that and announced that Lance had won the competition but had not achieved the "A" standard and needed to achieve it on his last throw to go to the Olympics. Knowing the crowd in Eugene, Lance walked to the front of the ring, put the discus in his left hand, reached both hands over this head and started a clapping motion, an indication to the crowd that he needed their support. The crowd, understanding Lance's request, started clapping along with him; quickly over 22,000 people in the stands were standing, yelling, and clapping in unison for Lance. He entered the circle from the front, went to the back of the ring, gathered himself a bit, started his wind, came across the ring in control, and let out one giant yell as he threw the discus. Scrambling to maintain his balance from the throw, he almost fouled. The throw was higher than his other throws, and the crowd sensed it was going to be a good throw and roared again when the discus landed. It was a long throw close to the area of Lance's early throws. Distances are measured electronically in these meets, so it takes some 15 seconds for the entire process to work. Finally, the distance came up; and it was "65.15." Lance and everyone in the place went crazy. Lance had made the team on his last throw by15 centimeters (6 inches). A dream had come true, and Lance was off to London!