My early reflections of Cornell, Howland, Hayes, and Merryfield, beginning in 1959 and continuing unabated to this day, are all about great caring co-workers from a very small Corvallis, Oregon, consulting firm. It’s about these co-workers who took on great and wondrous projects with honesty, understanding, and patience with my learning process, and a deep appreciation of the importance of applying the principles outlined in Jim Howland’s Little Red Book. And, yes, it was red and not yellow in those days.

Most often these co-workers were really my teachers, bosses, and mentors who always approached me as an important co-worker whose success was their success and whose family was their family.

Beginning in 1959 as a Civil Engineering Undergraduate Sophomore at Oregon State College (now a university), two of my important instructors were Arlen Borgen and Joe Worth. Together with Ralph Roderick who would drop in for after-hours engineering round-table discussions, my first and very positive impressions of CH2M as a place to work began to form. Throughout my undergraduate work at OSC, other CH2M staff crossed my path as my instructors in the same Red Book mold.

Most noteworthy of my instructors was Fred Merryfield, who taught me water and wastewater treatment in my senior undergraduate year. His lectures convinced me that water and wastewater treatment as a consultant should be my career. Throughout my graduate work at OSC in 1962/1963, Fred continued to drive home the thought that long hours and hard work, successfully accomplished as part of a team, was the only approach.

How I survived Fred’s courses with a “B” average and was ultimately hired by Fred is a reflection that will be with me always. I was always prepared and never slept through his classes. As Fred was of the old-school British in terms of his education and training, he religiously applied those teaching principles in his classes. He had the uncanny ability to sense which students were unprepared for his class. That unlucky chap was placed in front of the class at the chalkboard to explain his solution to the previous day’s assignment while Fred attacked his solution and “pride” in front of his peers. As for sleeping in his classes, he could and did hit students with an eraser along side of their heads at 30 feet with such force as to knock the student off his Apperson Hall drafting table stool. The safest place in his classroom was to stay awake in the front row!

Fred, as CH2M’s Human Resources Manager and staff, was still my primary target to get hired. From 1963 to 1968 while I was in the Air Force, Fred and I would correspond and visit about job prospects with CH2M. His response was always “Look me up when you get out of the Air Force, and we can talk" (no real encouragement or job offer). In early 1968, as my Air Force career was winding down, our family had grown from just my wife, Carol, whom I married in my 1961 senior undergraduate year, to include a 2-year-old son. It was serious time to find a new paying job, so onto the interview circuit I went because CH2M only seemed passively interested in me.

As luck, would have it, good or bad, Fred decided to try to contact me while I was out of town in Portland, Oregon, interviewing with CH2M’s arch rival Stevens, Thompson, and Runyan. Fred first contacted my wife in our apartment in Washington, D.C., and then learned from an unsuspecting wife “the rest of the story.” As I was walking to collect my baggage at the Portland Airport in 1968, Fred had me paged! After several chewings on his part and an equal number of “I am sorry" responses on my part, Fred Merryfield offered me a job as CH2M’s engineer on the world famous South Tahoe Public Utility District (STPUD – a great abbreviation!) Project!!! Since the early 1960s, the project had been developed by Clair A. Hill and Associates in association with CH2M.

Finally, at last, my long-desired career with CH2M started! In September 1968, I reported, without stopping in Corvallis (a military term), directly to STPUD, truly a World Class Project. My local contacts were Clint Smith, a former Clair A. Hill and Associates employee (later CH2M employee} and Russ Culp. Russ, as a former CH2M manager for the Tahoe project, had recently decided to leave CH2M and become STPUD’s District Manger. Bob Chapman (CH2M) and his wife, Meredith, had left the week before Carol and I arrived at South Lake Tahoe, California. Clint Smith, of Clair A. Hill and Associates, showed me CH2M’s time sheets and how he thought Bob Chapman had filled them out! (This is an important process if one wants to get paid and feed one's family.)

Harlan Moyer of Clair A. Hill and Associates, as the South Tahoe PUD chief engineer, Clair Hill himself, and Russ became my day-to-day supervisors and mentors. Their support and fascinating project made my next 2 years at Tahoe pass very quickly. Over the phone to Corvallis, I was introduced to CH2M’s project manager, Gene Suhr, and many great administrative staff. I found Gene, in spite of his brusque business-like manner, to be the most caring person I have ever met and one who had very sound advice. My Human Resources indoctrination was all done over the phone. Jerry Wilson, then a Clair A. Hill and Associates employee, replaced Clint Smith; and together we finished the full-scale plant research work. 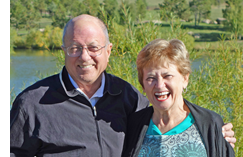 For Carol and me in 1971, it was then off to Corvallis, or Mecca as it was known in those days. Here I was introduced to three of my four other life-long mentors, friends, and subsequent supervisors: Jerry Boyle, John Filbert, and Sid Lasswell. We also had the pleasure of meeting and working with another very young and bright engineer, Ralph Peterson. All of us learned very quickly how technically sound Ralph was, how quickly his mind worked, and how much he cared for and believed in CH2M. When we would attend meetings with equipment salespeople who we didn’t particularly care for, we often would – for sport – invite Ralph, who was then part of the Industrial Process Group, to the meetings. The technical destruction of the salesperson's pitch was a sight to behold. In the Reston, Virginia, office around 1973/1974, I met my fourth mentor, Don Evans, who was then just a brand-new engineer.

Throughout our career with CH2M HILL, we were given the wonderful opportunity to see many parts of the world, to work with other great and caring Firm leaders such as Archie Rice, Jim Poirot, and Tom Gibbs; and to meet many other great CH2M HILL staff and clients. A standing early warning sign of a pending relocation was where Gene and/or John had been sent to begin a job. When I took Carol out to dinner, her first question was always, "Where are we going next?"